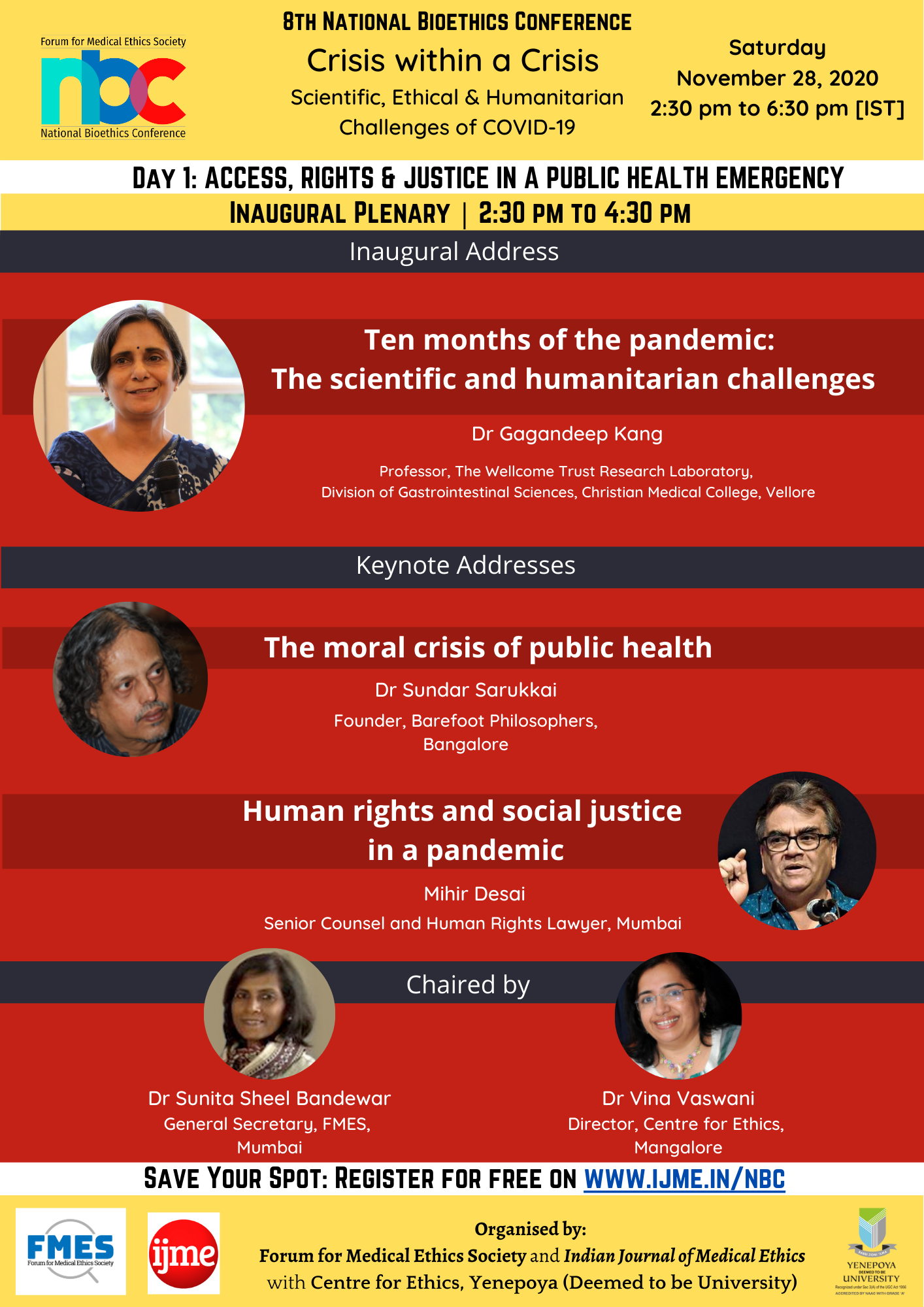 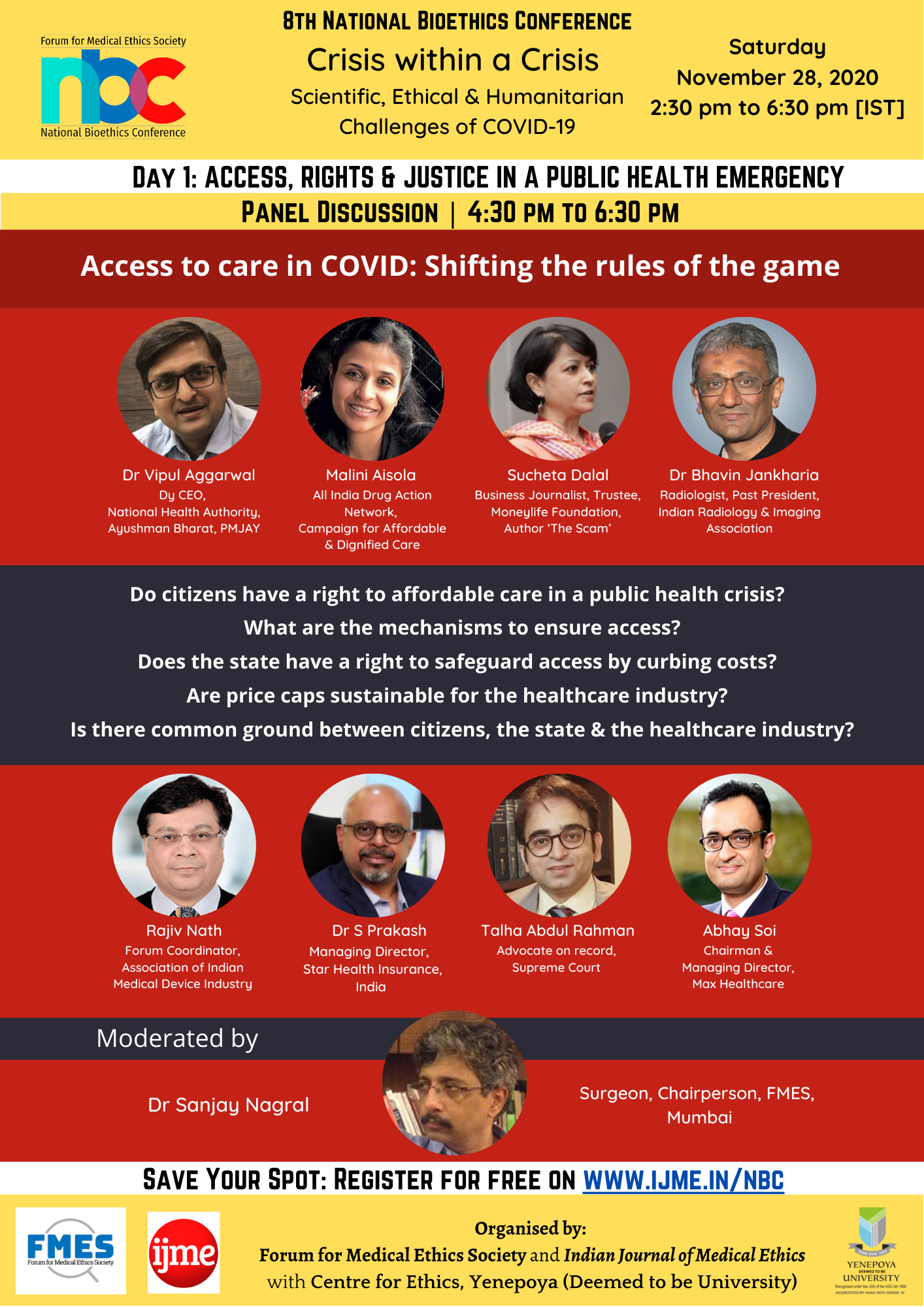 Founded in 1993 by a group of medical practitioners disillusioned by unethical medical practice, it evolved into a wider umbrella group for individuals from diverse backgrounds interested in bioethics. FMES publishes Indian Journal of Medical Ethics (IJME), the only indexed and peer reviewed leading journal on bioethics in India and South Asia. In 2005, it established a platform, namely National Bioethics Conference (NBC), for reflection, debate and coming together of people interested in the improvement of the healthcare system. Since then NBCs are organised every two years. So far seven such NBCs have been organised, each attracting between 350 to 700 participants. They are co-hosted by various entities – academic institutes, and non-government organisations; and FMES in different cities of India. Although called National Bioethics Conference, it does attract participants from the South Asia region as well as from the Global North.

In 1992, eight doctors known for their eminence in ethical practice and concern for the public health system established a panel on the platform of Forum for Medical Ethics (FME) and contested the Maharashtra Medical Council (MMC) elections. By sending out a letter to all doctors in Maharashtra and by using the media for creating public awareness on the role and responsibilities of the Medical Councils, the FME strove to bring the implementation of medical ethics to the centre of the debate in the election. The FME ensured that votes for the members of its panel were voluntarily sent through mail by each voter on his/her own in the postal ballot system used for the elections at that time. The group also witnessed massive rigging of the elections by the candidate-doctors supported by money power and politics. The electoral malpractices were documented in detail by the group, and presented to the Mumbai High Court in a PIL and also communicated widely through the first newsletter, entitled “Medical Ethics”, published in August 1993.

Medical Ethics found wider support from the profession and the public, and was brought out every three months and gradually expanded its scope. When it applied for registration as a journal with the Registrar of Newspapers, New Delhi, it was provided a new title, and so from January 1996, it was brought out as Issues in Medical Ethics. Later, when the Registrar of Newspapers accepted our application for the change in name, the journal started coming out as Indian Journal of Medical Ethics from January 2004.

Centre for Ethics (CFE) Yenepoya (Deemed to be University), Mangalore

The Centre for Ethics (CFE) at Yenepoya University, Mangalore was established in February 2011. Dr. Vina Vaswani, Professor & Head, Department of Forensic Medicine & Toxicology, who had completed her Master's in Bioethics in 2008, as an Erasmus Mundus student, was appointed Director.  It was the first ethics-dedicated centre in a medical college in India.  The Centre was set up to bring about a reawakening of medical ethics and bioethics in the health care setting, through academic programs, research and cultural exchanges.  Supported by an educational research grant (1R25TW010305) from National Institutes of Health, USA, CFE runs a two-year, full-time Master's in Research Ethics. In addtion, the CFE offers two postgraduate diploma courses - one in Bioethics/Medical (PGDBEME) and the other in Clinical Ethics (PGDCE), along with other short courses and student activities in various sub-disciplines of bioethics.