Letter to MMC by FMES, PUCL-MH, FAOW, and MFC urging to restore its order suspending licenses of two doctors accused of abetting the suicide of Dr Payal Tadvi
Archives > Vol 8, No 1 (2011) 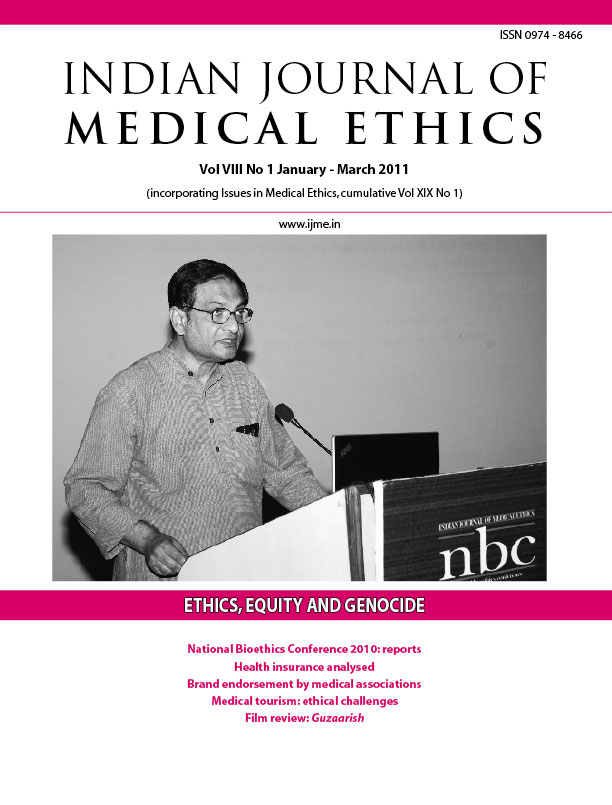 In November 2010, the Third National Bioethics Conference once again brought together a small but growing, committed, and vigourous minority, not just from India, but from distant corners of the rest of the world as well. We hope they went home energised by the information, shared experiences, analyses, and the sheer joy of knowing they are not alone in the struggle for decent healthcare for all.

Energy is certainly essential as the challenges grow apace. This issue outlines several of them. A plenary speaker at NBC-3 outlines what he sees of rampant commercialism, from within the system itself. From another perspective, a doctor activist brings home to us how the poorest of our people are attacked through a war by starvation. Binayak Sen stands for medical ethics in action, for which he has been duly convicted for sedition and sentenced. It is for us to understand what is in store for conscientious health professionals and stand together to defeat it.

Health insurance is currently said to cover about 11% of India’s population. Whom does it benefit, and how can its coverage be improved? Three of our authors analyse the issue from several angles.

Clinical research is a fast-growing field in the country and abroad. Is its focus patient-centred, and are its methods transparent? Two articles by eminent researchers delve into the finer points and their ethical implications.

The vexed question of links between pharmaceutical companies and medical professionals is ever-present. Medical associations add another angle. This issue is discussed in an editorial and in a selected summary.

The editorial on NBC-3 is an introspection into what the conference achieved. The conference report sums up the issues raised. NBC-3 was also a time to honour pioneers in bioethics. The December conference felicitated three stalwarts-Vasantha Muthuswamy, CM Gulhati, and Sunil Pandya-for their generous contributions to the field over several decades.