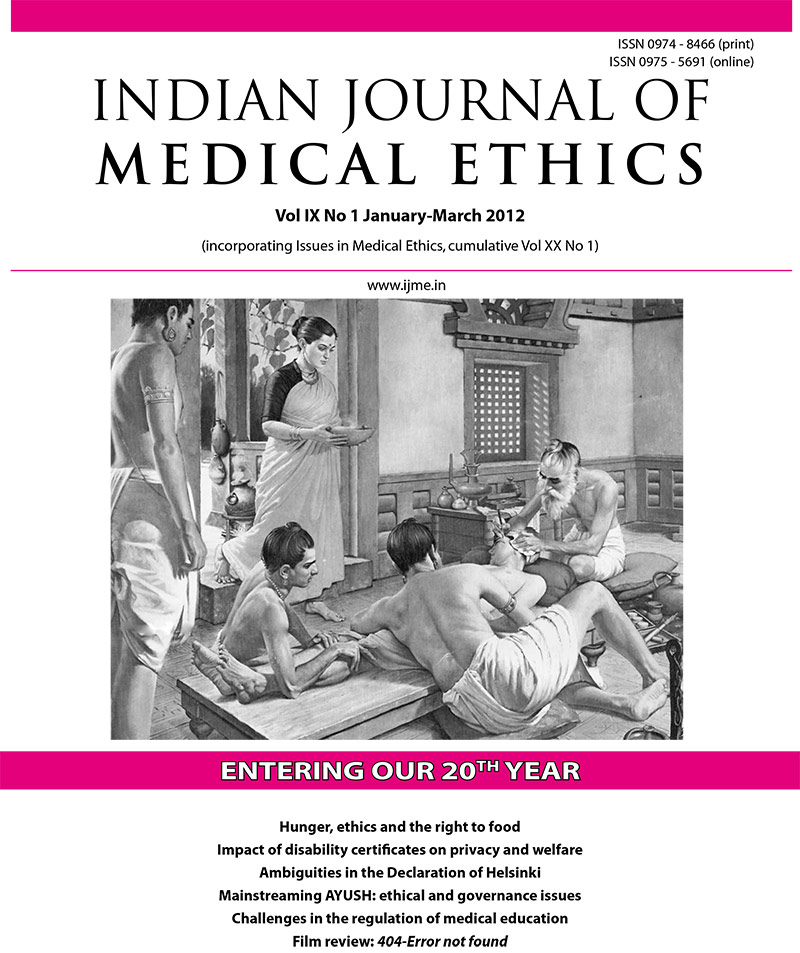 Looking back to move forward

This apparently contradictory step may be inadvisable while crossing the street or driving, but is essential for IJME when entering its 20th year of publication. The same applies to any social organisation or movement, unless it wants to replicate past blunders. India in the 21st century is becoming a battlefield of contradictions: the total population surges ahead while girls are going missing in large numbers; massive stocks of foodgrains rot in the open while people starve without the basic right to food being implemented; and a comprehensive scheme exists for integration of traditional medicine into healthcare, with little practical implementation on the ground. All these gaps have been analysed in this first issue of 2012.

Can a research study which aims to reduce suffering caused by a serious health problem be said to be successful if it has exposed participants to unnecessary harm? A study from the 1970s has been revisited and discussed from varied standpoints in this issue, re-examining the ethical standards of healthcare research. Only public probing into the ethical responsibilities of researchers and clinicians, as also researcher-clinicians, can prevent current and future tragedies in the name of public welfare. We also need a medical education system which selects and equips doctors to heal the sick in the best possible way. An editorial and a comment both look into attempts to reform this system.

Promising legislations await the attention of parliament in several areas. The draft National Food Security Bill has finally been tabled in the Lok Sabha, the culmination of a long struggle by several organisations. This is the right time to analyse them and press for improvements. We carry an analysis of the new Mental Health Care Bill by a group of practitioners. We have also a strong plea for removal of ambiguity in the Declaration of Helsinki on the existence of placebo-controlled trials so as to make universal standards in healthcare a real possibility.

With an issue bursting with energy and ideas, IJME wishes its readers a fruitful and active new year, with the hope that the movement for ethical healthcare and research will stride ahead with increasing confidence.