Letter to MMC by FMES, PUCL-MH, FAOW, and MFC urging to restore its order suspending licenses of two doctors accused of abetting the suicide of Dr Payal Tadvi
Archives > Vol 6, No 4 (2009) 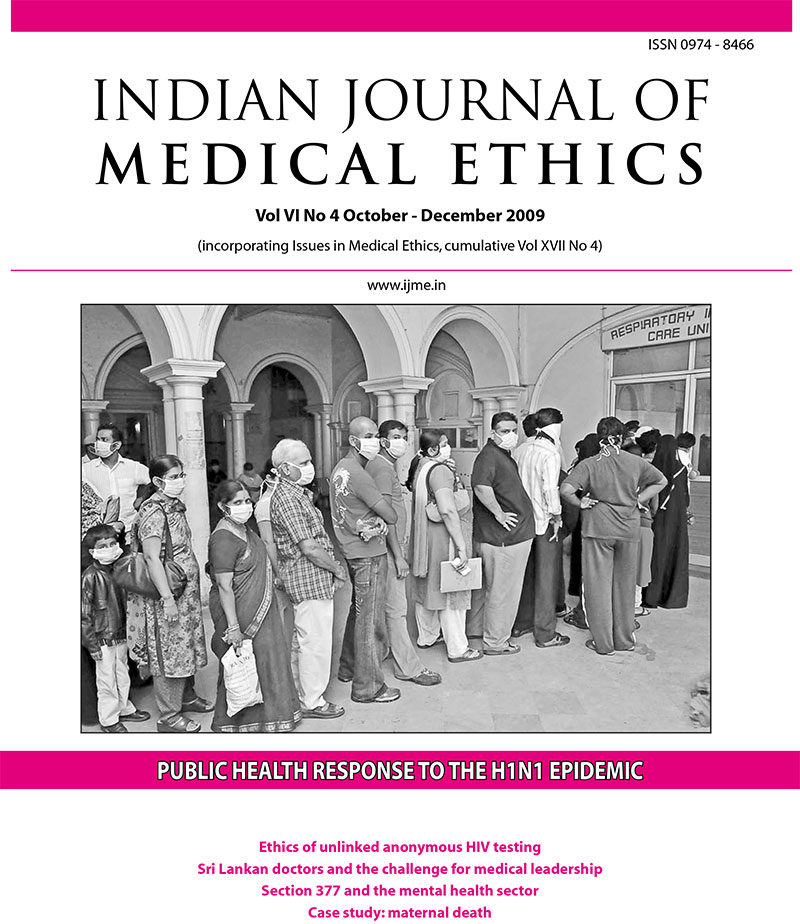 Medical practice can reflect social prejudices and discriminatory attitudes. In the light of the Delhi High Court judgement decriminalising homosexual sex between consenting adults, we carry two comments, from an activist and a psychiatrist, on how associations of mental health professionals have addressed the concerns of gay people. In another context, a researcher analyses the interactions between sonographers and pregnant women in a public hospital in Australia. She argues that these interactions represent an “everyday ethics” that can shape our attitudes to issues such as gender.

The public health system has an ethical responsibility to ensure that it sends out the right messages. This responsibility was not met when the H1N1 outbreak started in Pune. The government’s lack of dialogue with private doctors and lay people caused public panic and put a strain on health services, writes an activist from Pune. Further, the messages of the public health system must be backed up by effective services. In the case study discussion in this issue the commentary writers reflect on the ethics of a health system that promotes emergency obstetric care but fails those who reach healthcare facilities on time.

In the area of research ethics, we carry an editorial questioning the ethical basis of unlinked anonymous testing for HIV when antiretroviral therapy is provided fr0ee by the government; a neonatologist defends a trial that has been criticised for depriving the control group of treatment, and the ethics of blanket consent for research is debated. Finally, we introduce a new column, a factsheet on clinical trials in India.