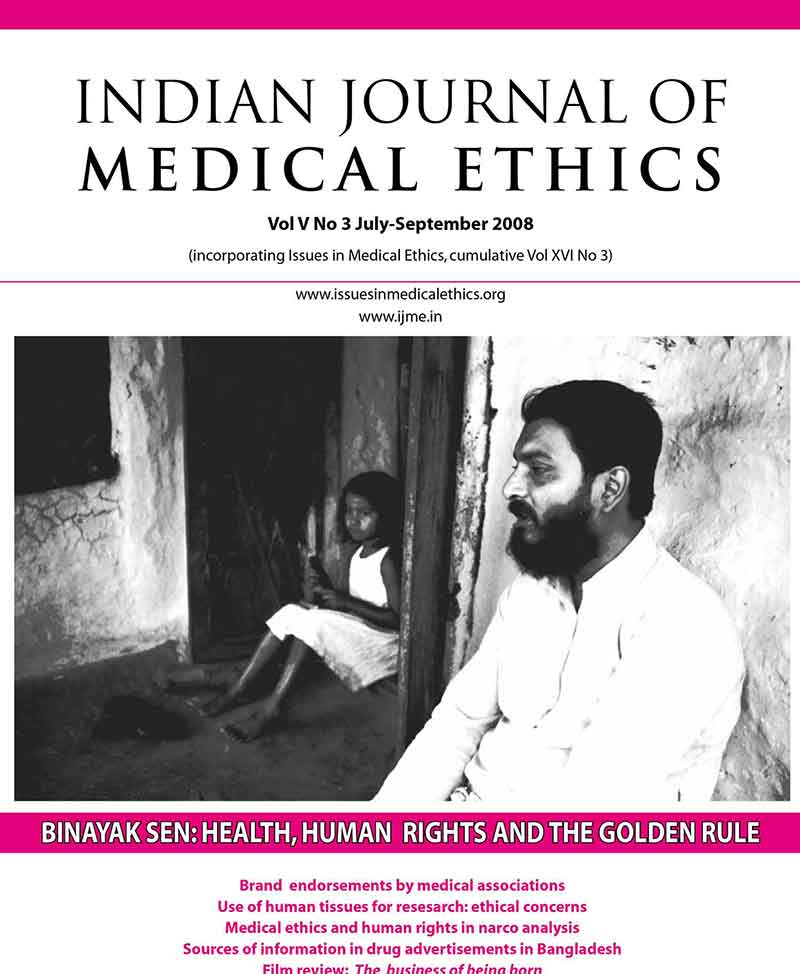 Some health professionals view health and human rights as inextricably linked. Others just don’t see the connection. Two essays in this issue of the journal illustrate the positive and the negative roles that doctors can play, as advocates for the victims of injustice, or as instruments of the state.

It has been more than a year since the arrest of Dr Binayak Sen, public health and civil rights activist. Dr Sen, who remains in jail despite an international campaign for his release, was recently honoured with the 2008 Jonatha n Mann Award for Global Health and Human Rights. An editorial writer answers the question that many have asked about activist doctors: “Why don’t doctors just stick to taking care of patients, rather than getting mixed up in human rights?

The participation of doctors in the death penalty and in torture has been condemned by medical associations the world over. However, this has not been an issue among doctors in India. Doctors have covered up evidence of torture, they have assisted in executions, and, for the last seven years, they have actively participated in a practice that meets the UN definition of torture. In this issue we carry an abridged version of the 22nd Dr Ramanadham Memorial Lecture organised by the People’s Union of Democratic Rights in September 2007. The speaker, a member of IJME’s editorial board, notes that “…the participation of doctors in narco-analysis and the death penalty, and the tolerance of medical associations for their unethical acts, are eroding the very ethical core of the medical profession.” The complete text of the lecture is available on the IJME and the PUDR websites.

Another editorial discusses the Indian Medical Association’s endorsement of fruit juice and cereal, apparently to support its educational work. The writer notes that this is only the most recent example of medical associations giving their stamp of approval to a commercial product for a price.

What does informed consent mean? How is it obtained, and when? What does it cover? Is there a format for obtaining consent? A forensic doctor answers these questions and clears up some misconceptions. A commentary writer notes that informed consent is not a legal contract but a critical component of the special doctor-patient relationship.