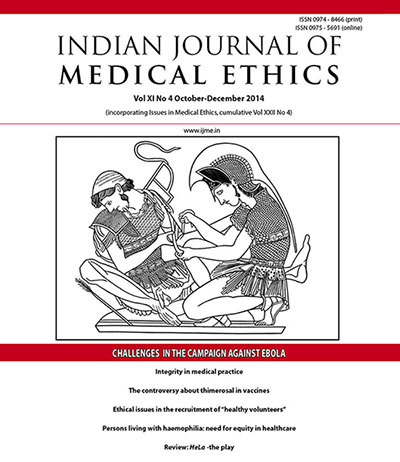 We are not islands

No human being is an island, to paraphrase the poet Donne, and this was never more true than it is today. The Ebola virus has taken thousands of lives in Africa, and is now taking death to many distant doorsteps, as epidemics have before. Is the world healthcare community able to cope and to bridge healthcare disparities? The rigorous and efficient efforts which need to be made inevitably raise ethical concerns, and these must be satisfied, says an editorial in this issue of IJME. People are forced to migrate to distant places for their livelihood, where they become the neglected “other”. The healthcare needs of poor migrant workers are rarely met, but should be a priority, says an article. Two articles discuss the use of thimerosal in vaccines and why it should be done away with.

These subjects involve large masses of people, but the serious problems of smaller groups, such as people living with haemophilia or autism, are no less important. One article dwells on the policy changes needed for the former group to lead better lives; another explores whether a traditional society’s positive value of acceptance of those suffering genetic disorders may lead to the neglect of preventive measures.

Debate is the soul of democratic change, and we have two more vigorous contributions to the discussion on the cervical cancer trials in India, and whether they satisfied ethical norms. Another relatively small group contributing to healthcare research is the “healthy volunteers”. A study enters their guarded world to examine the conditions under which such research is done. Another looks at drug advertisements in a medical journal from an ethics perspective.

Finally, all the reforms in the world can become a reality only when the people implementing them have integrity. An editorial analyses what integrity means in society, particularly among healthcare practitioners.