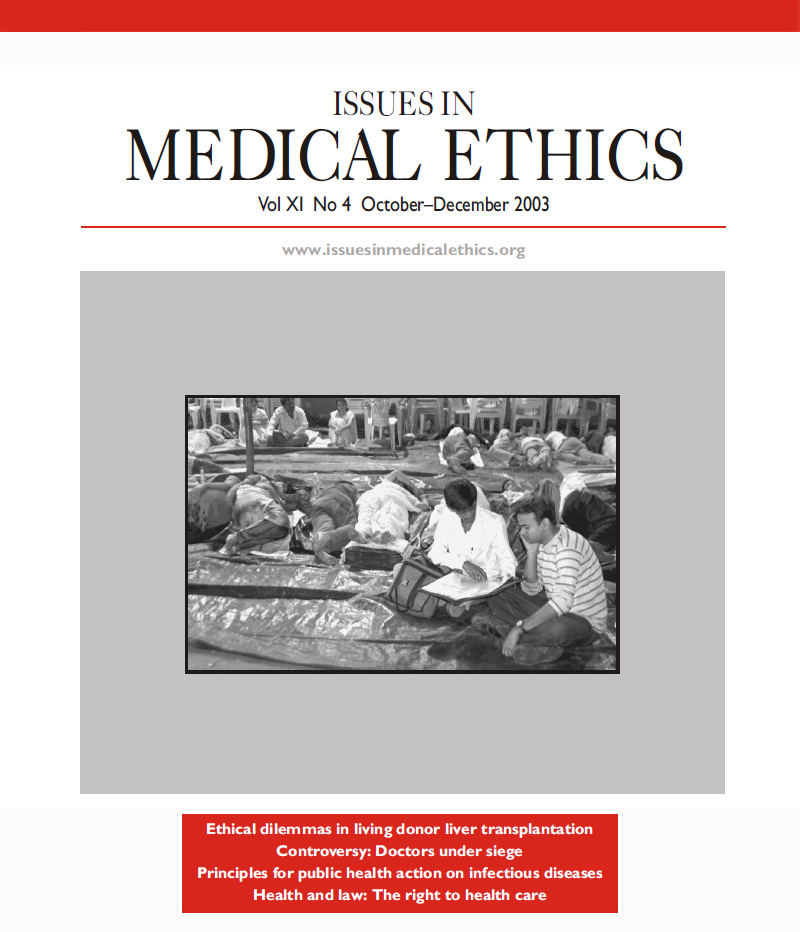 The state of the medical profession

The tragic death of a liver donor at a hospital in Delhi is a reminder of the need to address several ethical issues before considering living donor liver transplants. The editorial describes some of these requirements.

Are doctors being unfairly criticised by a public with unrealistic expectations? The  ‘controversy’ section carries two views on the matter.

The Medical Council of India has taken note of a complaint filed against Dr Praveen Togadia of the Vishva Hindu Parishad for misconduct, unethical practice and offences.  The complaint, filed by the Medico Friend Circle, refers to Dr Togadia’s actions and statements in Gujarat since February 2002. The petition and other details are accessible through the website www.issuesinmedicalethics.org

The reported harassment of a medical student by his teachers has sparked off a heated debate in Kerala. A public health professional writes on the crisis in medical education in that state.

With this issue we start an occasional column on health and law. The first column deals with the right to health care.

Cover: The cover picture shows medical college applicants and their parents resting after a demonstration outside St George’s Hospital, Mumbai. The sharp hike in fees for those applying under the government quota for private medical colleges, implementing a Supreme Court judgment, has led to protests, boycotts and cases in the High Court and Supreme Court. In October 2002, a Constitution Bench of the Supreme Court ruled against having different fees for ‘free’ and ‘payment’ seats in professional colleges in India. Annual fees collected by private medical colleges in Maharashtra alone would have gone up from Rs 21 crore to Rs 60.8 crore as all students would have to pay Rs 3.80 lakh annually. In Maharashtra, admissions were halted following protests and hectic political lobbying. Alternative formulas have been proposed by the government and private medical colleges with varying quotas for ‘merit’, ‘backward class’ and ‘management’, for which the fees range from Rs 15,000 to Rs 7.5 lakh depending on the formula. On September 25, the Supreme Court rejected the government’s formula but directed that admission be completed according to MCI’s schedule. The MCI deadline for admissions is September 30. Shailesh Mule, Mid-day.

'In matters of money and murder, it is the first step that is difficult.'
Hemantha Senanayake
124 Abstract Full text PDF