The moral dilemma of the polio eradication programme

During the last five years, globally, cases of polio caused by vaccine viruses have outnumbered those of polio caused by natural (wild) polioviruses, posing a moral dilemma. Public health ethics should ensure the best interests of the community, with equity in sharing benefits and risks irrespective of socioeconomic disparities. Vaccine viruses in oral polio vaccine (OPV) cause vaccine-associated paralytic polio (VAPP), while paralytic polio is also caused by vaccine-derived polioviruses (VDPVs). By its policy of the use of OPV in low and middle-income countries, while rich countries use the safe inactivated polio vaccine (IPV), the Global Polio Eradication Programme has been responsible for social injustice. In 2017 and 2018, there were outbreaks of polio in Syria and Papua New Guinea due to circulating VDPVs, after many years of these countries remaining free of polio due to wild polioviruses. The only ethical way forward for global polio eradication is to replace OPV with IPV in all countries.

Disease eradication can remove a pathogen without waiting for development to succeed. Smallpox eradication illustrated this model – international efforts resulted in eradicating the virus of smallpox in all countries, rich and poor (1). Disease eradication can thus be the acme of public health ethics – providing absolute equity in sharing the benefit. Fortunately, smallpox vaccination was almost completely safe from serious adverse reactions except in persons with eczema or immune deficiency (2). Since vaccination could be discontinued once smallpox was eradicated, any risk to individuals from the vaccine was automatically removed.

The intention of the World Health Assembly resolution passed in 1988, to eradicate polio, was to repeat the humanitarian and idealistic goal for the benefit of all the world’s children, irrespective of socioeconomic disparities (3).

However, equity in the sharing of benefits and risks in the polio eradication programme has not become a reality, thus highlighting a moral dilemma. Social justice, the very aim of the disease eradication programme, has been compromised. We explore the reasons for this problem and suggest an ethical way forward.

When the Expanded Programme on Immunisation (EPI) was launched in 1974, the vaccine chosen against polio was the live oral poliovirus vaccine (OPV) as against the inactivated poliovirus vaccine (IPV) (4). As the intention was to promote immunisation within primary healthcare in low income countries lacking any immunisation programme, OPV had the advantages of low cost and ease of administration. That policy was further perpetuated in the global polio eradication programme launched in 1988. The polio eradication programme was initially nested within the EPI, and OPV therefore became the vaccine of choice in the initial phase of the programme.

From 1988 to 2015, the Global Polio Eradication Initiative (GPEI) maintained the policy of the exclusive use of OPV. The alternative vaccine, IPV, was not only not used, but also actively discouraged in OPV-using countries (5). Public health ethics demands that any intervention applied widely should be fully backed by sound science (6). There was no scientific evidence that the exclusive use of OPV was essential or sufficient for polio eradication, as no country in the world had been able to eliminate polio by the exclusive use of OPV. All countries that depended on OPV for the purpose achieved elimination of all types of polio only after introducing IPV, since OPV itself can be a cause of polio (7). OPV has two flaws related to its safety and efficacy.

The safety problems of OPV were well recognised right from 1964 onwards. Occasionally, OPV caused vaccine associated paralytic poliomyelitis (VAPP) in the vaccinated and in their close contacts (contact VAPP). It also caused “community-acquired VAPP” due to vaccine viruses reverting to a virulent state (8). Vaccine viruses were known to be genetically unstable and also transmissible, the two most undesirable properties of any live vaccine.

Problems related to the uneven efficacy of OPV across geographical regions were recognised from 1972 onwards (9). The efficacy of OPV was not satisfactory in India and many tropical developing countries, resulting in vaccine-failure polio due to wild polioviruses in large numbers of children given 5-7 doses or even more (10). On account of its failure to ensure safety and efficacy, the choice of OPV as the tool for polio eradication was not a sound decision. On the other hand, IPV had been consistently shown to be completely safe and completely effective. Excluding IPV from public health interventions contravened public health ethics (10).

Cuba was able to eliminate wild polioviruses using OPV exclusively, and the experience in Cuba is often cited in support of the exclusive use of OPV for safe elimination of polio in other countries (11). However, VAPP has continued to occur in Cuba at a frequency similar to that in other countries (11). In short, the Cuban model shows the effectiveness of OPV against wild polioviruses, but it also illustrates the gaps in vaccine safety. Cuba still remains at risk of the emergence of vaccine-derived poliovirus if OPV coverage declines for any reason. In 2000, an outbreak of circulating vaccine-derived poliovirus Type 1 (cVDPV-1) was documented in Hispaniola, in the Caribbean region (12). Indeed, this was not the first time cVDPV had emerged – in Egypt a vaccine-derived Type 2 virus had circulated for ten years, until it was interrupted in 1993 (13). These gave the clear signal that the OPV-only policy of GPEI was in urgent need of revision. The imperative was to introduce IPV and expand its use universally. That was not done because of the faulty application of science – on the assumption that OPV alone was able to eradicate polio. On the other hand, there was ample scientific evidence to prove that IPV alone was sufficient to eliminate polioviruses in several countries. The consequences of the unscientific vaccine policy continue to affect children who develop polio due to vaccine-derived polio viruses in many countries. For illustration, we present two very recent examples of polio outbreaks due to cVDPVs.

Papua New Guinea (PNG) had successfully eliminated natural (wild virus) polio 18 years ago. However, in accordance with GPEI policy, PNG had to continue distributing OPV to children, exposing them to the risks of VAPP and outbreaks due to VDPV. We do not know how many cases of VAPP had occurred, as it was not being monitored in PNG, or other OPV-using countries. Eventually, in 2018, when OPV coverage had declined to 60%, a large polio epidemic occurred, that paralysed 26 children, caused by cVDPV-1 (14). The magnitude of the epidemic, in terms of total number of children infected with cVDPV-1 is unknown, but could be as large as several thousands, considering the very small case-to-infection ratio. Case-to-infection ratio for wild Type 1 poliovirus is about 1:200; for cVDPV the ratio is likely to be an order of magnitude lower. We suspect that for 26 cases, the number infected could have been about 52,000. In 2018, there were a total of 104 cases of programme-induced polio caused by cVDPVs in eight countries while Pakistan and Afghanistan together had only 33 cases of polio due to natural Type 1 poliovirus (15,16). The question is: if Pakistan has wild Type 1 polio, why should PNG suffer from vaccine-induced polio due to Type 1? Does a public health programme, however lofty its intentions, have the moral right to let loose a virus that may cause an outbreak of the disease on the eradication agenda?

In 2017, Syria had a programme-induced Type 2 epidemic of polio that paralysed 74 children, when OPV coverage had fallen to 53% (17). It was the single largest recorded cVDPV- 2 polio outbreak.The magnitude of the infection epidemic would have been a lakh or more as the case-to-infection ratio is even smaller than that of Type 1. Syria has not had any natural polio for nearly two decades, but had to continue OPV. Since the natural Type 2 virus had been globally eradicated in 1999, the programme-induced Type 2 outbreak 18 years later in Syria poignantly illustrated the moral dilemma of an eradication programme meant for equity in sharing benefits and burdens. For comparison, in 2017, the number of natural polio cases, globally, was 22 and that of cVDPV polio was 96 (18).

Every year, the numbers of global wild polio virus WPV and cVDPV cases are published by the US Centres for Disease Control and Prevention (CDC) and GPEI, but VAPP cases are not similarly counted (19, 20, 21, 22, 23, 24, 25, 26, 27). cVDPVs are VDPV isolates for which there is evidence of transmission in the community.

Apart from cVDPV, OPV also causes polio due to immune-deficiency associated VDPV (iVDPV) and ambiguous VDPV (a VDPV). These are vaccine viruses reverting to a virulent state without evidence of circulation – iVDPVs are isolated from persons with primary immunodeficiency (PID) and aVDPV are isolates from individuals or from environmental samples.

We have data from CDC publications for the years 2014 through June 2018, presented for 18 months, 18 months, 17 months and 15 months respectively, with 3-6 months of overlaps in each report. We have calculated per month averages from each report and multiplied by 12 to arrive at estimates in the years 2014 through 2018 as 5 cases of iVDPV cases and 11 cases of aVDPV cases per year.

Based on this mathematical construct, if we combine the cVDPV, iVDPV and aVDPV plus VAPP figures, we see disturbing numbers of polio cases caused by the continued OPV-based eradication programme (Figure1). It is essential to reiterate the fact that all these cases are clinically no different from the polio caused by natural polioviruses. 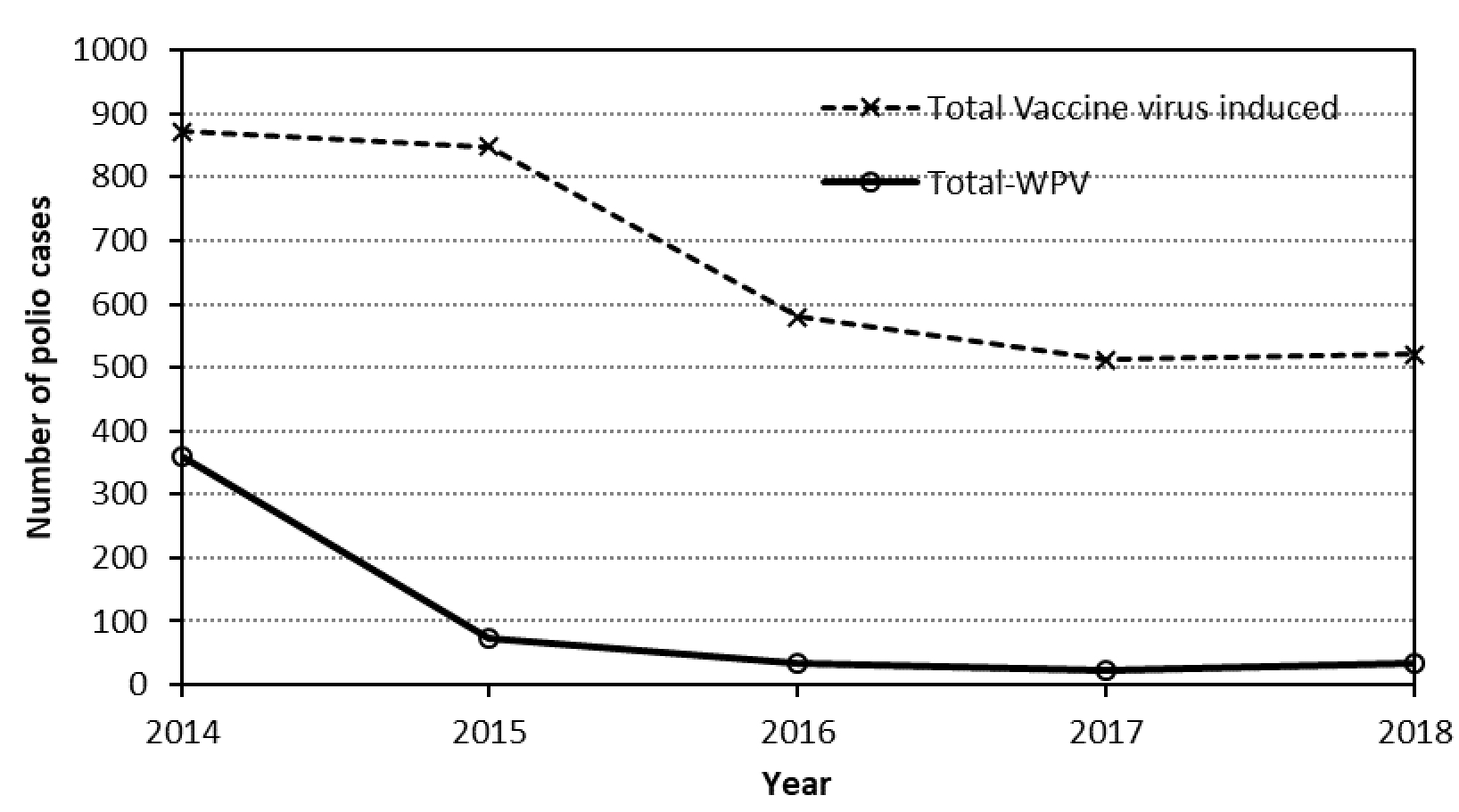 The way forward for India and for the world

Globally, some 50 countries have no risk of programme-induced polio, as they rely on IPV which has no risk of vaccine-associated polio, while some 140 countries are at risk of programme-induced polio. Low and middle-income countries face challenges due to financial dependence on agencies which work in close coordination with the relevant international bodies. Consequently, such countries are often forced to accept the policies of the funding bodies, willy-nilly. Therefore, all stakeholders have a greater responsibility to abide by ethical principles when framing guidelines for these countries.

What happened in PNG could happen in India, if the immunisation coverage with OPV slips from the current level. Thankfully, Type 2 vaccine virus was withdrawn from use in 2016, but that was unfortunately 12 years after it was due (32). Hopefully, what happened in Syria will not ever happen anywhere else.

There is an alternate pathway to ensure that no adverse risk of OPV threatens countries like India. India currently gives two intradermal fractional doses of IPV at ages 6 and 14 weeks, in lieu of the recommended one full dose intramuscular (IM) IPV at 14 weeks. India must include a full immunising schedule of IPV in the Universal Immunisation Programme. Two full IM doses given at 14 weeks and at 9 months will suffice. Once a reasonably high coverage is achieved, say 85% or more, OPV could be discontinued to remove any future programme-induced polio. From the year 2000, several countries have shown the way by discontinuing OPV and relying exclusively on IPV (33,34).

The 2-dose schedule can only be, for practical reasons, given using stand-alone IPV. On the other hand, a combination vaccine containing IPV, namely a hexavalent vaccine, could be given in a 3-dose schedule, without altering the current schedule of giving pentavalent vaccine.

This approach is also valid for all countries currently using OPV. The earlier the use of OPV can be discontinued, the sooner the eradication programme can become free of this ethical anomaly.